Should I Worry About my Snoring?

2222 Dental Blog Should I Worry About my Snoring? 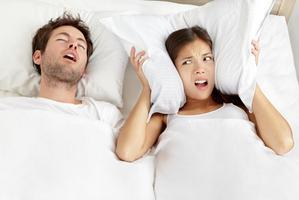 Well, we can all agree that snoring can be quite annoying to your sleep partner, but did you know that snoring can be dangerous (even life-threatening) to the snorer? Snoring can be indicative of health risks, including sleep apnea. Symptoms of snoring health risks include daytime tiredness in which a person is not resting well and as a result feels lethargic. This can lead to a failure to perform well on the job, in school or while driving, resulting in mistakes and errors.Apnea is a condition in which breathing is interrupted when the tongue or other tissues obstruct breathing by clogging the throat. A badly positioned jaw is often the cause. In these instances sleep is lost due because the brain wakes the individual so they can unclog their airway and tiredness is the consequence. Apnea creates additional and more dangerous health risks, including elevated blood pressure, as well as heart attacks and strokes as a result of stress on the cardiovascular system due to lack of oxygen.Apnea is often noticed by the individual's sleeping partner who observes the apneas (the periods of silence often followed by coughing or snorting sounds as breathing restarts). The condition is then diagnosed through the monitoring of sleep during a sleep study performed in the controlled environment of a sleep study laboratory.If diagnosed, a sleep apnea professional can help with a custom fitted oral device which repositions the jaw and aids in keeping the airway open for proper breathing during sleep. Treating sleep apnea helps to reduce the health risks which it can cause.

Does Getting Older Hurt The Enamel?

Getting old is unavoidable. It is isn't always pretty and comes with its fair share of problems. Your mouth and oral health will be no exception...

Dental implants can be a welcomed alternative to bridgework or dentures that offers a permanent solution for missing teeth or severely damaged tooth structure...

Dentures are great devices that can bring back your quality of life. They allow you to eat the foods you enjoy the most, and what's more, they help to promote good oral hygiene...

Dangers Your Mouth Can Face if You Only Drink Bottled Water

Water is one of the most important elements any human being needs. Scientists say that about 60% of the body is made of water. Therefore, for the body to work as it should, it needs about 8 glasses of water every day...

Adults Are Not Too Old to Get Dental Sealants

Dental sealants are effective at protecting your teeth from further damage or evening a bite. They are typically placed on the biting surface of a tooth and are made of a thin plastic material...

At some time or another, most of us have searched for ways to beat the system involving personal oral care...